Gian is often asked to speak at both web and accessibility conferences around the world, including in the United States, Europe, South America and Canada. She spoke at the United Nations on the importance of accessibility at the Eighth session of the Conference of States Parties to the Convention on the Rights of Persons with Disabilities.

Among other sites, Gian has worked as the Accessibility Consultant for the Melbourne 2006 Commonwealth Games and was responsible for training Microsoft developers in accessibility. She also wrote the original and updated version of the Victorian eGovernment Resource Centre Web Accessibility Toolkit. 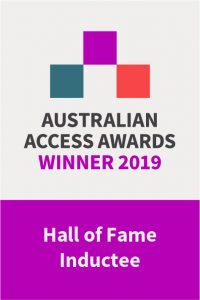 Gian will be running this two-part workshop over two days in August. Join us to learn all about the unique accessibility issues on mobile sites and mobile apps, including hover traps, VoiceOver swipe traps and zoom traps.

Gian will be presenting on “Updates to the Mobile Accessibility Testing Guidelines,” “Social media and accessibility” and “Video player accessibility.”

Overview of social media accessibility
How to Read a VPAT
What’s wrong with providing a separate site for people with disabilities?
Prioritising web accessibility during the build of a web site
Did someone say map? Making interactive maps accessible
CAPTCHA: How to do it right (ie. don’t use CAPTCHA!)

Gian is co-chair on both the Mobile Site Testing and the Native App Testing Sub-Committees, which have created and are frequently updating a standard Mobile Accessibility Testing Methodology.

United Nations, Convention on the Rights of Persons with Disabilities

Gian Wild presented at the United Nations Eighth session of the Conference of States Parties to the Convention on the Rights of Persons with Disabilities.

The Melbourne Web Accessibility Group was started by Gian Wild in 2010. The aim of the group is to promote accessibility and provide a meeting place for people interested in the area.